After our outstanding success with the 300km Step-Up, it seemed everyone was super-keen for more long rides.  I was buzzing with the excitement of having ridden with mates for a whole big ride, so

invited them to join me for the next 400km adventure.   Nick and Chris H thought it was such a good idea that they invited Chris U along.  One flu and one pulled muscle later, Chris U was on his own.  Dave realised that a Mawson Trail adventure and a 400km in the one month may be stretching things, so politely bailed out.  In the interim, Mary Ann disappeared on an urgent grandparenting appointment – at Leggoland in Japan.  So it was left to my trusty wing-woman, Nola, to keep me company.  After all, she had ridden a 200km before, and a bunch of 100’s.  And she is bullet-proof and generally much more capable than me.

Our place again became ground zero for the long ride, with most riders opting for a Friday night sleep-over in preparation for the 5.30am Saturday kick-off.  To enhance the authenticity of my ride, I decided to carry all of my gear for Paris-Brest-Paris, hoping to acclimatise to lugging a Besser Block equivalent on my bike.

There were numerous comparisons of weather forecasts, which typically matched the weather of the previous few weeks – wet, cool, hot, windy, dry, cloudy and unsettled.  One last hopeful check of my favourite three weather sites gave predictions of between 20 and 70 percent chance of showers, so I gave up and went to bed. 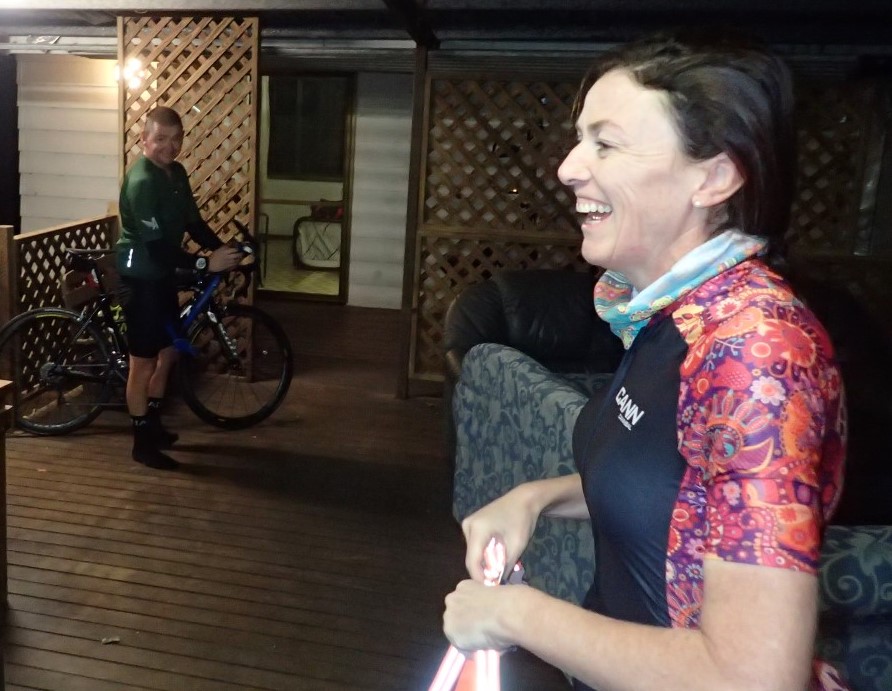 In the pre-dawn darkness of Saturday morning, our excited little group – Nola, Kieran, Jane, Keith, Chris and Gayle – gathered our gear and headed out onto the dirt road to wait for the official starting moment.  I treated everyone to my usual array of safety warnings aimed at surviving the first few hundred metres of our trip.

Move over to the left hand side when it flattens out at the top to miss the potholes……..

And take it easy down the hill – it’s a major pre-dawn kangaroo crossing.

I think my audience may have phased out just a little somewhere during my briefing.  In the end, they rode single file behind me up the dirt road, onto the bitumen and down through kangaroo central, before whizzing past me into the darkness.  I was seriously questioning the wisdom of my Besser Block experiment already.  Fortunately, Nola was waiting for me at the top of Herberton Range.

Contrary to all expectations, the weather was dry and calm for the ride up the Herberton Range and across Longlands Gap.  Keith led the field to the first Control in Malanda (61.9km), closely followed by Chris, and then Jane and Kieran.

The others already had dipped into the back of Kim’s truck, replenished their supplies and started on their second leg to Yungaburra when Nola and I rolled into town at 8.22am.

We managed to keep our stop relatively brief, and headed off to tackle Meragallan, Peeramon and Lake Eacham while the weather continued to look co-operative.

We had a short break in Peeramon, while Nola fixed a puncture and I admired the view, took photos and was otherwise not very useful.

After a quick loop around Lake Eacham, we rolled in to our second Control at Yungaburra (106.5km) at 10.58am where Glynis was waiting for us.  The others had long since eaten and headed on for Atherton.

At least, they said they were heading for Atherton.  There are still concerns about why some riders were seen becoming overly familiar with a local icon.

Nola and I continued towards Atherton, with a detour around the Kairi loop.  The wind was starting to pick up, mostly unhelpfully, making this otherwise short leg more challenging than expected.  The rest of the group made good time into Control 3, with some taking time for a proper sit-down and coffee.

In stark contrast, Nola and I dragged ourselves in to Control 3 in Atherton (148.1km) by 1.07pm, opting for another dip in to Kim’s magic truck for our supplies and a quick sit on the footpath bench.  There are no luxuries on a 400km ride for those who voluntarily cart Besser Blocks.

The leg from Atherton to Dimbulah always promises great things, and I talked up the prospect of a downhill and downwind 75km stretch to Nola.  Almost like a free ride, I recall mentioning, trying not to remember the many times that hot weather, dry water bottles and swirling winds have made this stretch definitely non-cruisy.

But our luck held out, and and we scooted along Channel Road, Springmount Road and out onto Dimbulah Road, helped by a hefty tailwind.  We tried hard not to contemplate the return journey against the wind to Mareeba, and instead focussed on celebrating Nola’s longest ever ride when we ticked over the 200km mark on Leadingham Creek Road.  We rolled in to Control 4 in Dimbulah (223km) at 4.16pm, amazed to find we had company and keen to hear how everyone was faring.

Chris had left just before we arrived.  Jane was dripping blood from her knee, and claiming Kieran had bowled her off her bike in a lunge for Control 4’s finish line.  Apparently this was in retaliation for him arriving at Control 1 a full minute after her (an RO’s decision while Kieran was taking a natural break).   Keith was having a near-death experience on the grass with stomach cramps.

We happily tucked in to more food and chatted to Glynis and Kim, carefully delaying our ride back to Mareeba.  Kieran and Jane headed off, and we followed soon afterwards.  Keith muttered something about riding with us to Mareeba if he could hold our wheel.  I dismissed this as highly unlikely, knowing from past form that Keith’s wheel would quickly disappear ahead of us the minute he touched a pedal.

I now suspect Nola’s all-round abilities must extend to communing with the wind-gods.  For the first time in memory, the wind dropped as we started towards Mareeba.  Keith miraculously appeared soon afterwards, and we swapped turns for several kilometres, before he took a long turn on the front, generously dragging us along.  He then dropped behind us, caught up again, then dropped well behind

several times.  Kim’s truck pulled up in front of us, and Keith disappeared beside it while we rode ahead.  When he didn’t reappear, we assumed the stomach bug had finally won, and commiserated on his behalf.  A few kilometres later, shortly before the road to Mareeba reached it’s highest point, Keith appeared from nowhere, said a quick hello, and disappeared into the distance ahead of us.  We later learned he had stopped to throw up, then drank a can of Coke, which apparently led to a miraculous revival.  Keith was tucking into a feed from the Golden Arches when we arrived in Mareeba (269.8km) a few minutes after him at 6.37pm.   We are in awe……

Kim and Glynis had set up a particularly comfy footpath party for us in Mareeba, and all six of us lingered quite a while as the sun set in the distance.  At this point on the 300km ride a few weeks beforehand, we were sitting at Walkamin contemplating the last 30km home to bed.  It felt a bit more daunting to be staring at another 130km including a loop out and back to Mt Molloy.  We tried not to compare notes with Glynis, who was heading home to set up the welcome party.  This was code for setting an alarm, then spending a cosy evening cuddled up on the bed with my Teddy watching a John Wayne movie.  I love her style.

The wind again decided to co-operate, and the 40km ride to Mt Molloy was reasonably easy going – apart from the rain that thundered down around the half-way point.  I reassured Nola that it was just another passing shower.  I was wrong…… again.  As we neared Mt Molloy, we saw Keith heading back to Mareeba, followed soon after by Chris and then by Keiran and Jane.  We arrived at Control 6

in Mt Molloy dripping wet, and found Kim waiting for us (310km, 8.37pm).  I continued to devour the contents of the truck, while Nola mentioned that it was coming close to her usual bedtime.  She declined a power nap of any duration less than eight hours, and we started the return journey to Mareeba.

It was just 90km home, and I tried to entertain Nola by continuing my countdown to the finish line.  I noticed her usually cheery responses becoming less and less convincing, and there was an occasional mention of discomfort in the nether regions and eyes that wanted to slam shut.  Given my mate’s renowned resilience, I could safely assume that she was experiencing a form of near-torture.  I had few other comforting strategies available, and cautiously continued with welfare checks and distance count-downs.

Mt Molloy to Mareeba passed in another blur, and we were soon heading into town where Kim was lurking in the main street.  Just 50km to go, I reassured Nola.  We compared notes on aching bits (an extended conversation), and headed on.  Our next brief stop was at Walkamin (only 30km to go !!!), where Nola stretched out in the bus shelter for a few minutes, muttering about her long-passed bedtime.  It took all of her considerable strength of character to get back on the bike, knowing that her bed and sleeping husband were just a few hundred metres away.

I continued my line of prattle, counting down the kilometres, reminiscing about the mostly favourable weather and predicting an easy run home.  Once again, I was less than accurate, as the head wind picked up, the heavens emptied themselves upon us and the temperature plummeted.  Another brief stop in Tolga to don raincoats (just 15km to home !!!!) and we were soon passing through Atherton while I counted down the last 10km to the finish.  We arrived at 2.05am after our 20hr 35min day out to a rousing welcome by Glynis and Kim in the driveway.

Keith had finished at 12.38pm (19hrs08mins) and was long since showered and off to bed.  Chris arrived at 1.23am (19hrs53mins) and was still chilled to the bone and immoveable on a couch on the deck.  Kieran and Jane came in just six minutes before us at 1.59am (20hrs29mins) and were nowhere to be seen.  A warm shower and bed were obviously irresistible, after their few navigational hiccups and resultant 410km ride.

The rest of us started to file through the showers, when Kim’s bleary eyes spotted the tell-tale signs of a near capacity rural plumbing system.  While the rest of us dozed or tried to appear helpful, Kim tackled yet another of the many tasks that are essential to a successful FNQ Audax ride, showing again why we love that bloke.

We woke a few short hours later to that Sunday morning smell of coffee and a brekkie bar-b-que (yep, Kim again), and spent a happy few hours sitting around debriefing about a great ride.  It was the longest ever day ride for all of us, and we were all delighted to have successfully finished.

Our thanks to Kim and Glynis for their support through a very long day.  There are six FNQ riders who are pretty proud of their big day out.