It was a big day in Atherton.  82 riders registered for Eight Tableland Towns in a Day, the first Audax ride in Atherton on 17 April 2016, with most never even having heard of Audax before.

I was a first time RO (Audax-speak for Ride Organiser), had co-opted friends to help as volunteers, begged a few boxes of bananas from the boss, sent out a few emails, and convinced the local police that there would be about 15 or 20 riders taking to the streets.

Then it went viral.  And it was fabulous.

44 riders started the 100km course, visiting six towns of the central and southern Tablelands.  34 riders tackled the 200km course, which toured through eight Tableland towns, with lots of back roads and great scenery in between.  There was barely a sniff of Audax experience among us all, with only five people (including the RO) being Audax members, and most having joined just before the ride.

There was great enthusiasm at the start line as the 78 starters were organised into five starting waves.  The last gasps of the wet season cleared for the day, and the weather was overcast and windy.  Brevet cards were issued, lights were checked, and the ride briefing was delivered.

The first group was waved off only five minutes behind schedule (not bad for a first attempt), and the rest started at two minute intervals.  Our local police mate came to see us off looking slightly bemused, and was heard muttering something about “15 or 20 bikes”.  I’d been advised by more experienced RO’s to “maintain a low profile” for the ride, but in our small town any gathering attracts attention.  And gathering 78 riders along the main street near the police station at 6.30am on a Sunday morning was definitely not a recipe for keeping a low profile.

The groups headed downhill and downwind to the first control which was manned by Kim (my long-suffering husband) and Mike.  We’d stationed the big guys there, in the scrub, outside the prison entrance.  The riders were chatty and smiling as they worked out what to do with Brevet cards and munched on bananas.

The 200km riders continued downhill towards Mareeba, while the 100km course turned back towards Atherton, where the girls (Robyn and Linda) had set up Control 2 at Tolga Woodworks coffee shop.  With the uphill and upwind, there was a bit less bravado as riders arrived at Tolga, and most took little convincing to stop for a coffee and a break.

Both courses then wound around the back roads through Kairi to Yungaburra, where the 200km riders ducked down to the Afghanistan Avenue of Honour to stamp their cards.  Despite some concerns, all the riders managed to find the “secret control” stamps hung on street signs at the two unmanned turnarounds.  We are still wondering about the Brumby’s stamp that also appeared on a Brevet card.

On to Lake Eacham, where Malcom and Dennis (and later Kim and Nola) were waiting at Control 3, fully stocked with bananas (again) and lollies.  They were highly impressed with the good humour of the riders, and the round of “three cheers” from the main 200km group.

At this stage, most riders were keen to head for home, with many wondering why the “Tablelands” had so many lumpy bits in it.  Graham was first 100km rider home in the 4hrs12mins, closely followed by Frank in 4hrs15mins.  Special mention to Cherie and Glynis who rode their longest ride ever (over 60km) and came home smiling.  The last riders came home in just over six hours and were greeted by Katie at the finish line.  It was a very satisfied group that headed off to nearby Gallery 5 Coffee Shop for some well-deserved goodies.

Out on the 200km course, a large group rode together, with several coffee shops along the way benefiting from the experience.  But Megan decided to forego such luxuries and led the pack home in 8hrs03mins.  Four blokes saw her in the distance, but could not catch her.  Peter and Russell came in at 8hrs05min, with Joe and Richard at 8hrs07mins. 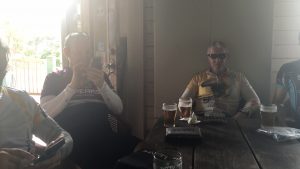 The main pack decided that the Peeramon Pub was just too tempting, and another rest stop was in order.  To add insult to injury, they sent photos of beers lined up on the bar to their mate who had ridden ahead and was waiting at the finish line.  Somehow, the bananas weren’t as exciting at that moment.  The last three riders came in at 10hrs59mins looking weary but very pleased with themselves.

There is high excitement in anticipation of the next Audax ride in Atherton on 15 May 2016.  Aptly titled “Get High on the Tablelands”, this ride heads into the northern and hillier areas of our beautiful region, visiting Queensland’s highest gazetted road, highest town and highest pub.  A 100km version offers some of the scenery and some of the effort, with the reward being a great day of riding among some great people.  For the faint-hearted, the 100km has an “escape hatch” halfway if the hills prove too taxing.  We are looking forward to another great ride.