After all the months of planning and endless harping about blogging my way through the Munda Biddi trip, where is the daily entry ?!? Fly Kim and Gayle – a surefire way to turn every holiday jaunt into an epic. 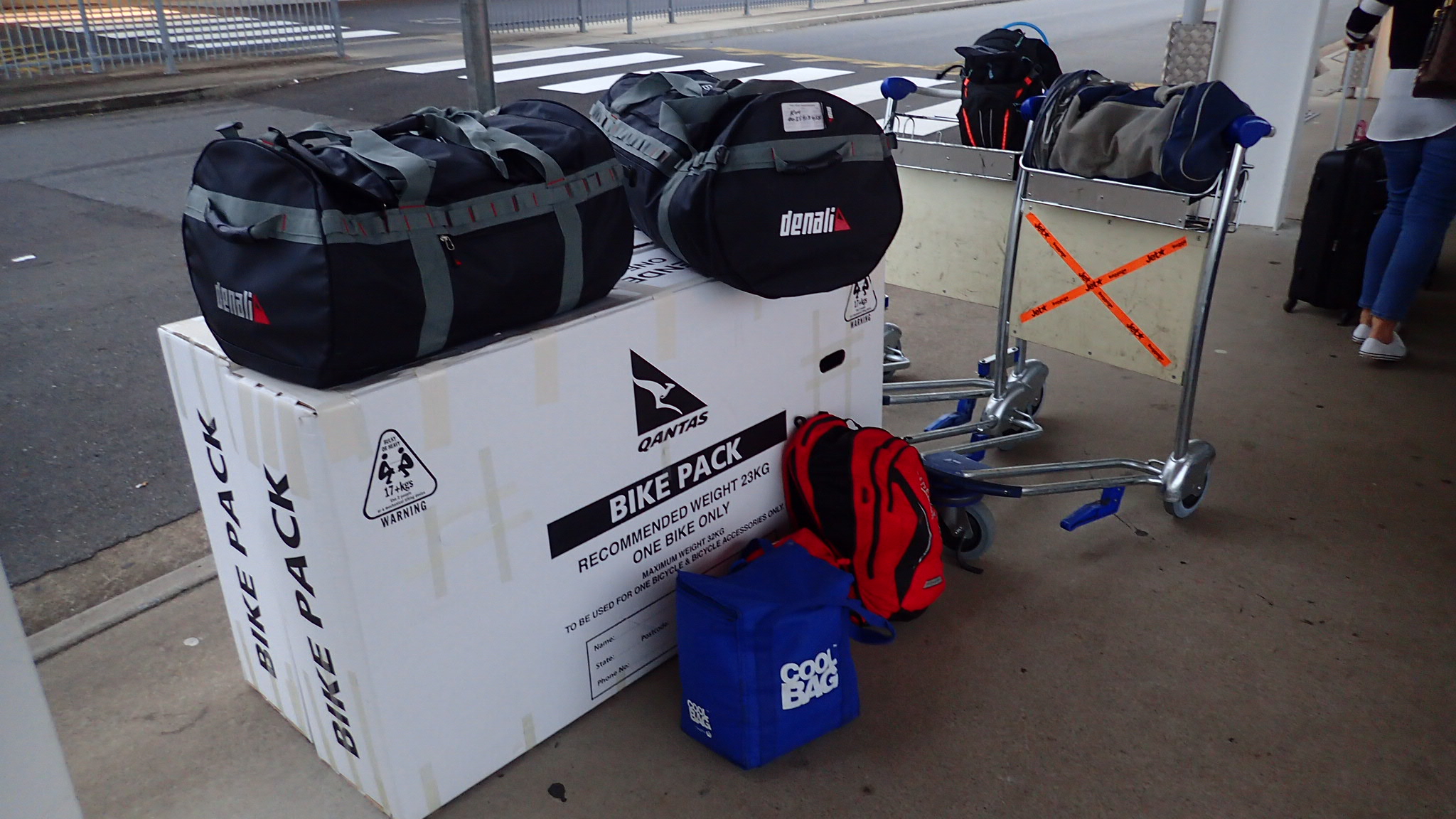 Maybe my suspicions should have been aroused the minute we got on the plane for our four or so flight from Cairns to Perth. The pilot announced it was to be “a long five and a half hour flight”, leading to groans of dismay rippling through the plane as the flight attendant started rearranging passengers to stack the back seats. The bloke who slid in to our spare seat explained that the plane had on a full load of fuel to tackle the strong headwinds. The passenger shifting was to stack the weight at the back of the plane to help with take-off. I was a bit skeptical until he added that he was a pilot for the airline and usually flew the route. So I did my best to lean back in my seat to help when the plane taxied down the runway.

It was nearly 1am before we found our hire car and drove to our B&B at Sawyer Valley, a few kilometres from the start of the Munda Biddi at Mundaring. Our host, Sally, had left instructions in the letterbox, which we totally forgot about, and instead met the neighbour who was out having a 2am smoke. He helpfully gave us ideas about how to let ourselves into the house or wake up Sally. Ultimately I remembered the critical information, and sent Kim back up the driveway to retrieve our instructions. After nearly six hours cramped on the plane, it didn’t take u

s long to settle into bed.

We spent the following day putting bikes together, shopping, returning our hire car, and generally scattering and rearranging our gear.  We arrived back at Sally’s and fell into bed again, after apologies for being so unsociable and totally focused on the trip ahead.

Despite our obsessional planning, we couldn’t plan the weather. The heavens opened during the night, and we quickly realised that our raincoats were going to play a major role in our lives. And that WA rain in August is cold, and that it is possible to ride a fully loaded mountain bike dressed in almost every piece of kit we had brought.

We set off from Sally’s backyard, across the highway and onto the KEP track for an easy 4km ride into Mundaring. The heavy rain continued all the way to our first stop at the Mundaring bakery, where Kim opted for the Munda Biddi equivalent of the Last Supper.

As the showers eased, we headed to the trailhead at the Sculpture Park for a celebratory photo shoot. We begged a few locals to take our photos, and they seemed amused but not especially impressed by our plans.

The trail headed out of town for an downhill easy ride to Mundaring Weir, followed by a stiff climb towards our first stop at The Dell. Day One gave us another first learning experience, this time about the importance of locating every Munda Biddi trail marker. As we headed downhill, expecting our smoko stop to appear at any moment, we came across a well used dirt road that refused to match anything on our maps. No amount of turning the map around would change the realisation that we were geographically embarrassed. Our little error resulted a few extra kilometres before we again found the trail, and stopped for smoko at The Dell.

The next section of trail included some steep climbs, many that were a bit much for a fully loaded Pokey. Some even challenged my ability to push up the hill, and Kim came back to lend a hand. The weather remained intermittently chilly and wet, with the occasional break of sunshine. I sweated through the uphills, and shivered through the downhills. I needed more wardrobe rearrangements than the average vaudeville performer, with arm warmers, raincoats and gilets repeatedly going on and off.

Day One also brought us face-to-face with the much heralded WA pea gravel. It seems that anyone who has ridden the Munda Biddi, or come close to it, or ever visited West Australia, has an opinion of pea gravel. Few of those opinions are positive. I had received so many dire warnings about its ability to up-end any cyclist that I was considering diving off Pokey to just get the anticipatory anxiety out of the way. If there was one advantage of being thoroughly rained on, it was that the rain had packed the pea gravel relatively tightly and decreased its ball-bearing qualities.

We rolled into Carinyah Hut delighted with our days ride, but ready to get dry and warm. Three other riders joined us at the hut, as well as a dog that had worked out how to find company and a feed on the trail. Kim again showed his talents as a dog whisperer.

It was a cold and windy night, but we were more than happy to bunk down in the shelter and enjoy the undercover picnic tables. The thermometer only read an overnight minimum of 8 degrees but it felt much colder.

The rain had stopped by morning, and we quickly slipped into our routine of being the last to leave. So many things to do, like breakfast, preparing our lunches, cleaning up the bikes, filtering water, and the inevitable packing. I was slowly getting the hang of the precision strapping and buckling arrangement Kim had orchestrated, but the organising of my panniers remains a totally random event.

We were treated to about 5km of easy downhill riding on a clear but still chilly 10 degrees. The riding stayed easy until we called a first rest stop after about 12km. Trail bikes had been through just in front of us, and had gouged up the trail surface giving us a less favourable experience of riding in pea gravel. I was more-nervous-than-normal-Nelly in a few places, with a few untidy wobbles, but nothing too serious. The most technically challenging part of the day was a long and very steep descent that had me alternatively hopping, walking and scrambling with Pokey.

We stopped for a lunch cook-up beside Canning River, taking our time over the flat breads and Kim’s yummy home-made rehydrated potato cake creations. Absolutely delicious with the blue vein cheese and sun dried tomatoes. After finishing our rough lunch with a cup of brewed coffee, we tackled the uphill stretch of the day. The long stretch of loose pea gravel on the uphill was a leg tester for Pokey and I had a few little walk breaks along the way. It was then a very pleasant easy roll to our second nights hut.

We managed an early stop after just 32km in fine but cool weather. Our camping dream was coming true, with time for cleaning bodies and bikes, chatting to the other guys, preparing tea and relaxing. Our meals have quickly been “voted best of the hut”, and we tried not to gloat too much over the beef curry and flat breads, chased down by a chocolate nightcap. The weather was so cold that I grew suspicious of my newly purchased weather tracker that assured me it was only 10 degrees. I checked my trusty Garmin – 2 degrees. We are sleeping in the shelters on open platforms that keep out the rain, but allow the full experience of the WA wind and ambient temperature. Needless to say, I was cold.